Spring is a dynamic and captivating time at Fort Ross Vineyard as the sun breathes life into the coming vintage. The vines have begun to wake from their winter slumber as budbreak began on March 30th. It is an ideal spring on the Sonoma Coast with many warm days and crisp nights, the entire property is starting to blossom. There is no better time to come visit our beautiful outdoor patios overlooking the Pacific Ocean to enjoy these spring releases! Savor springtime with Fort Ross Vineyard wine paired with exceptionally refreshing dishes.

"The delicate, milky flavor of fresh ricotta pairs with the grassy, lightly sweet taste of fava beans. Use best-quality cheese, produce, and bread here for a toast that’s more than the sum of its parts." - Food & Wine Magazine

Our 2018 Mother of Pearl Chardonnay matches the creaminess of this dish while creating balance with vibrant acidity. 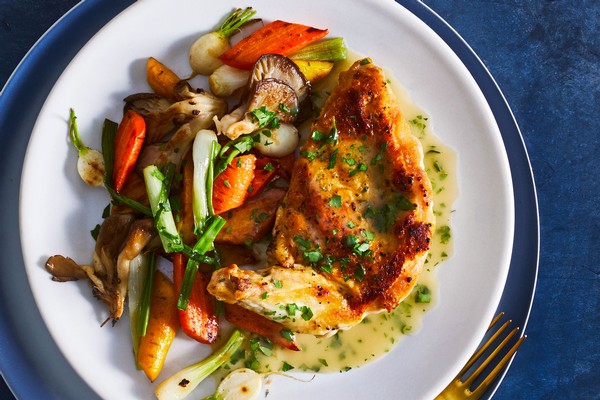 With its lifted acidity and bright red fruit characteristics, the 2018 Bicentennial Pinot Noir enhances this delightful spring meal without overwhelming the flavors. 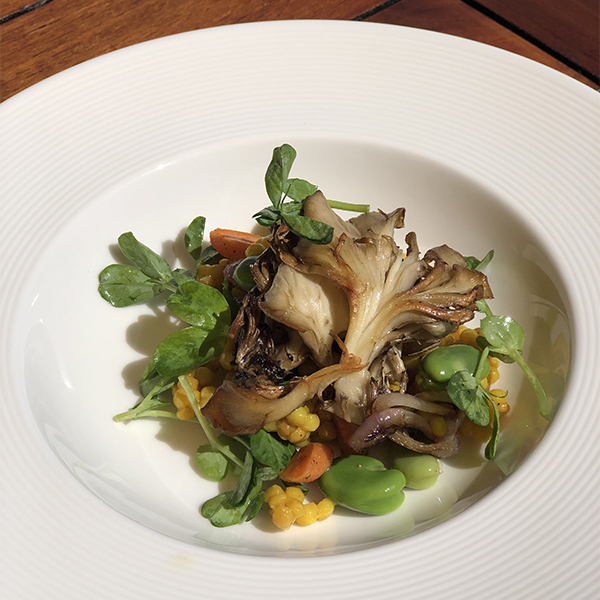 Fort Ross Chef Michael Dotson uses fresh ingredients that represent our vineyard - both Fava beans and peas grow in the cover crop between our vine rows, helping to keep our soil alive and healthy. Make your own tahini dressing to drizzle over it, and keep it in the fridge for up to 4 days! The 2018 Top of Land Pinot Noir will highlight the earthiness of the mushroom & umami of the dressing while allowing the other vegetables to shine.

Fort Ross chef, Michael Dotson has prepared this recipe to be enjoyed with our newly released 2018 Top of Land Pinot Noir

2. In a pot, toast couscous in olive oil until some of it starts to turn golden brown. Add turmeric and stir in. Then add water & sea salt, cover and turn down heat to low.

3. Cook 10 minutes and check to see if all of the water has absorbed. If not, cook 1-2 minutes longer. Transfer couscous to a cookie sheet to cool.

4. Brush a sheet pan with oil. Toss carrots and shallots with olive oil, salt, and pepper and spread evenly on half of sheet pan. Place clusters of mushrooms on other half and brush with olive oil and melted butter; season with salt and pepper.

5. Roast veggies in the oven until just tender and lightly colored, about 20 minutes.

7. Divide pea shoots among 4 bowls or salad plates and spoon equal portions of couscous salad over pea shoots. Top with a cluster of mushrooms and drizzle a teaspoon of dressing around plate/bowl and over mushroom.

This light, flavorful tahini dressing can be made in advance and stored in the fridge for 3-4 days.

1. In a bowl, whisk first 7 ingredients together well and emulsify oil in. Taste and adjust salt and pepper if needed or vinegar balance to your liking.

2. Let sit an hour before using so flavors can meld.

½ teaspoon black pepper, plus more to taste and for garnish

¼ cup plus 1 teaspoon kosher salt, divided, plus more to taste

1 ½ ounces Parmesan cheese, grated with a Microplane (about 1 cup)

2. Melt 1/4 cup butter in a large (12- to 14-inch) skillet over medium. Add onion and carrot; cook, stirring often, until carrot is tender, about 8 minutes. Add cremini mushrooms, celery, garlic, and chopped rehydrated morels; cook, stirring occasionally, until cremini mushrooms have released their liquid, about 5 minutes. Sprinkle mixture with pepper and 1 teaspoon salt; cook, stirring often and scraping bottom of skillet, until liquid has evaporated and vegetables start to caramelize, about 12 minutes. Add wine and thyme sprigs; stir to release browned bits from skillet. Cook, undisturbed, until wine has completely evaporated, about 2 minutes. Carefully pour reserved mushroom soaking liquid into skillet, leaving any sediment in bowl. Add broth to skillet; bring to a vigorous simmer over medium. Reduce heat, and simmer, stirring occasionally, until mixture has thickened and reduced to about 3 cups, 40 to 45 minutes. Discard thyme sprigs. Cover and keep warm over low until ready to use.

3. Bring 4 quarts water to a boil in a large pot over high. Add remaining 1/4 cup salt, and return to a boil. Add bucatini; cook, stirring occasionally, until pasta is al dente, 7 to 9 minutes, adding dandelion greens during last minute of cooking. Meanwhile, return ragù in skillet to a simmer over medium-high.

4. Using a spider or fine wire-mesh strainer, lift pasta and greens from cooking liquid, and add to ragù in skillet. Cook over medium-high, tossing to coat pasta with sauce. Add pasta cooking liquid as needed, 1/4 cup at time, until sauce is creamy and clings to pasta, about 4 minutes. Stir in mustard and remaining 1/4 cup butter until combined. Season with salt and pepper to taste. Fold in tarragon.

6 small hakurei turnips or radishes, trimmed and quartered (about 1 cup)

1. Preheat oven to 425°F. Sprinkle chicken evenly with 1 1/4 teaspoons salt and 1/2 teaspoon pepper. Heat oil in a 12-inch ovenproof skillet over medium. Cook chicken, skin side down, until skin is golden brown and crispy, 15 to 18 minutes. Transfer to a plate. Reserve drippings in skillet.

3. Return skillet to heat over high. Add rosé and remaining 3 herb sprigs; cook, undisturbed, 2 minutes. Add stock, and bring to a simmer over high. Simmer until reduced by one-third, 2 to 3 minutes. Stir in parsley and remaining 2 tablespoons butter; season to taste with salt. Pour sauce over chicken and vegetables.

4 (1/2-inch-thick) rustic bread slices or pain au levain slices, cut from the center of the loaf

2. Preheat grill to medium-high (400°F to 450°F). Brush bread slices evenly on both sides with remaining 1/3 cup oil. Place on unoiled grates; grill, uncovered, until grill marks appear, about 2 minutes per side.

3. Stir together ricotta, chopped tarragon, pepper, and remaining 1/2 teaspoon salt in a small bowl; spread seasoned ricotta evenly on 1 side of each toast slice; top evenly with dressed favas. Cut toasts in half on an angle; arrange on a serving platter. Season with salt, and sprinkle with tarragon leaves.

This fun twist on tapenade can be served on its own with tortilla chips, or can top salmon, pork or chicken. We recommend a glass of our Bicentennial Pinot Noir with any of these! 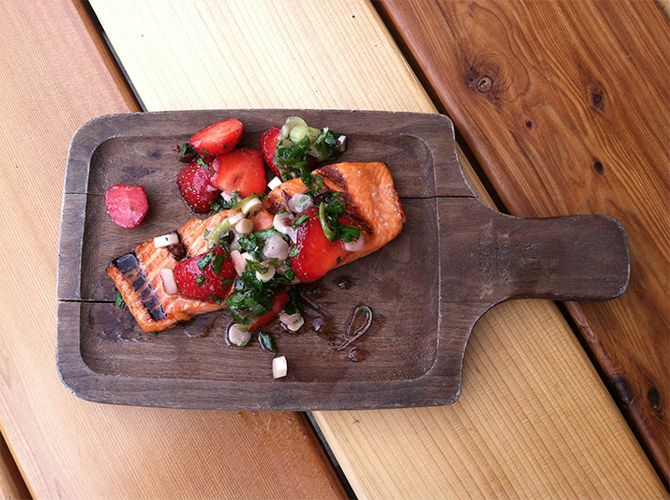 by Chef Stephanie Izard of Girl & the Goat

1. Mix all ingredients together, except strawberries. Add strawberries when you are ready to serve with your favorite grilled meat or fish.

Take advantage of fava beans while they're in season with this refreshing salad. We recommend pairing it with a glass of our Chardonnay - juicy flavors of lemon curd, autumnal pears, hazelnuts and brioche complement the savory spices and salty character of this dish. 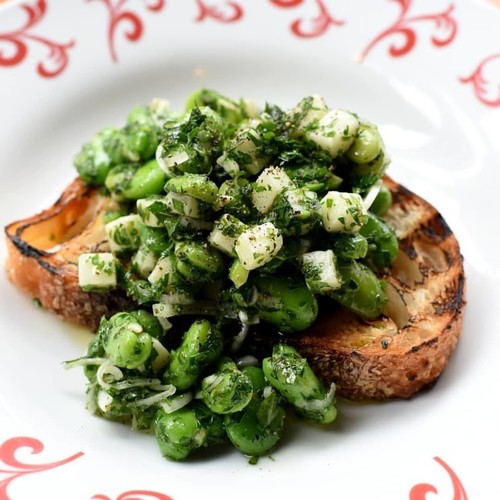 by Chef Marco Canora at Hearth

1. Bring a large pot of salted water to boil. Meanwhile, shell the favas.

2. Drop the beans into the boiling water and blanch until their skins loosen, about 3 minutes. Cool in ice water, peel, and put them in a large bowl.

3. Cut the pecorino into 1/4" cubes and add it to the bowl with the favas.

4. Add the rest of the ingredients to the bowl and mix well. Season to taste with salt and serve.