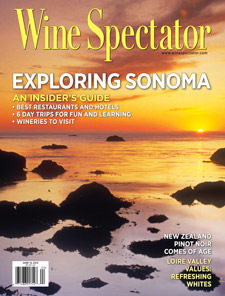 With its rugged landscape, wind and fog, the coast is Sonoma's most untamed winegrowing region. The official Sonoma Coast AVA, approved in 1987, is sprawling and encompasses about 800 square miles, from Mendocino County in the north to Marin County to the south. The scenery is so striking, however, that you won't mind exploring. Keeping things manageable, this day trip focuses on the area from Freestone to Bodega Bay and Fort Ross.

It's worth noting that Sonoma's first grapes were planted not by Spanish priests in Sonoma Valley but on the coast, circa 1812-1817, by Russian colonists at Fort Ross. The modern era dawned in the 1980s as pioneers such as Mike Bohan and David Hirsch began planting vineyards. Sonoma County's 62-mile coastline offers some of the most spectacular views and some of the easiest beach access in all of California. Just remember that the coastal climate can be chilly, even in the summer, so bring some extra layers just in case.

The coast and western Sonoma have long attracted rugges individualists and those devoted to nature. In the late 1960s, the region was popular with devotees of the counterculture. Cities like Sebastopol remain true to those alternative roots, featuring  many organic restaurants and other green-friendly businesses.

Venture off the beaten path for an authentic taste of true Sonoma Coast at this newly opened tasting room. Located one ridge away from the Pacific Ocean and with vineyards planted at elevations of between 1,200 and 1,700 feet, Fort Ross is literally on the edge of Sonoma's viticultural map. Owners Linda and Lester Schwartz began planting their vineyards in 1992. The Pinot Noirs and Chardonnays show a distinctive combination of crisp acidity and fleshy texture. Talented winemaker Jeff Pisoni joined the team in 2009.