Pinot Meets Pinotage at the Edge of the Continent 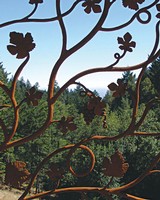 The turnoff to Meyers Grade Road comes up fast, near the entrance to Fort Ross State Historic Park. Don't look back; the road is narrow and the climb is steep. The driveway meanders through vineyards, a stand of tall trees, passes a meadow and a small pond and ends at a clearing. Directly beyond the tasting room, fog blankets the Pacific in a V-shaped vignette between forested hills; to the right, there's an old Citroën. Now I've really lost my bearings—have I somehow ended up in Bonny Doon?

The setting may be similar, but Fort Ross has had better luck growing Pinot Noir than Citroën aficionado Randall Grahm's experiment some hundred miles to the south. This January, Fort Ross-Seaview won AVA approval after a 13-year petition. Its viticultural distinction has more to do with proximity to cool ocean breezes and elevation above the fog line than its history, although the Russians planted wine grapes nearby nearly a decade before the friars in Sonoma planted theirs. During 200th anniversary events at Fort Ross, says owner Linda Schwartz, attending Russian oligarchs showed up, mad for their wine.

Lester and Linda Schwartz arrived here from the opposite half of the globe. Although they're white natives of South Africa, the right-wing government was closing in on friends in the labor movement. Linda taught music and Lester found success as an attorney in San Francisco. (Upon meeting this sensibly clad, modest couple, the impression is more of a Berkeley social studies professor plus a grizzled, Stellenbosch farmer.) In the early 1990s, they began planting a 50-acre vineyard, situated on open ground, but their tasting room plans were not without heated local controversy in this quiet corner of the county. In the end, says Linda Schwartz, some of their opponents came back seeking work.

The brand-new tasting room is spacious, lavishly spartan, appearing ready to be filled with wine country artwork and the usual merchandise. This is not to be, says Linda, a fan of the minimalist aesthetic. The wines are likewise clean and focused, in differing ways. The 2010 Chardonnay ($36) has a singular, floral aroma, sparked up with caramel notes and a lingering finish. The 2010 Sea Slopes Pinot Noir ($32) seems spiced with cinnamon, ending on a light, crisp note, contrasting with the flagship 2009 Pinot Noir's ($42) pure, plush boysenberry fruit and vanilla flavors. The 2007 Pinotage ($40) is an homage to South Africa's signature grape. With smoky, tarry aromas and a firm, rubbery-tannic finish, it's an alluring wine reminiscent of Malbec or Nebbiolo.