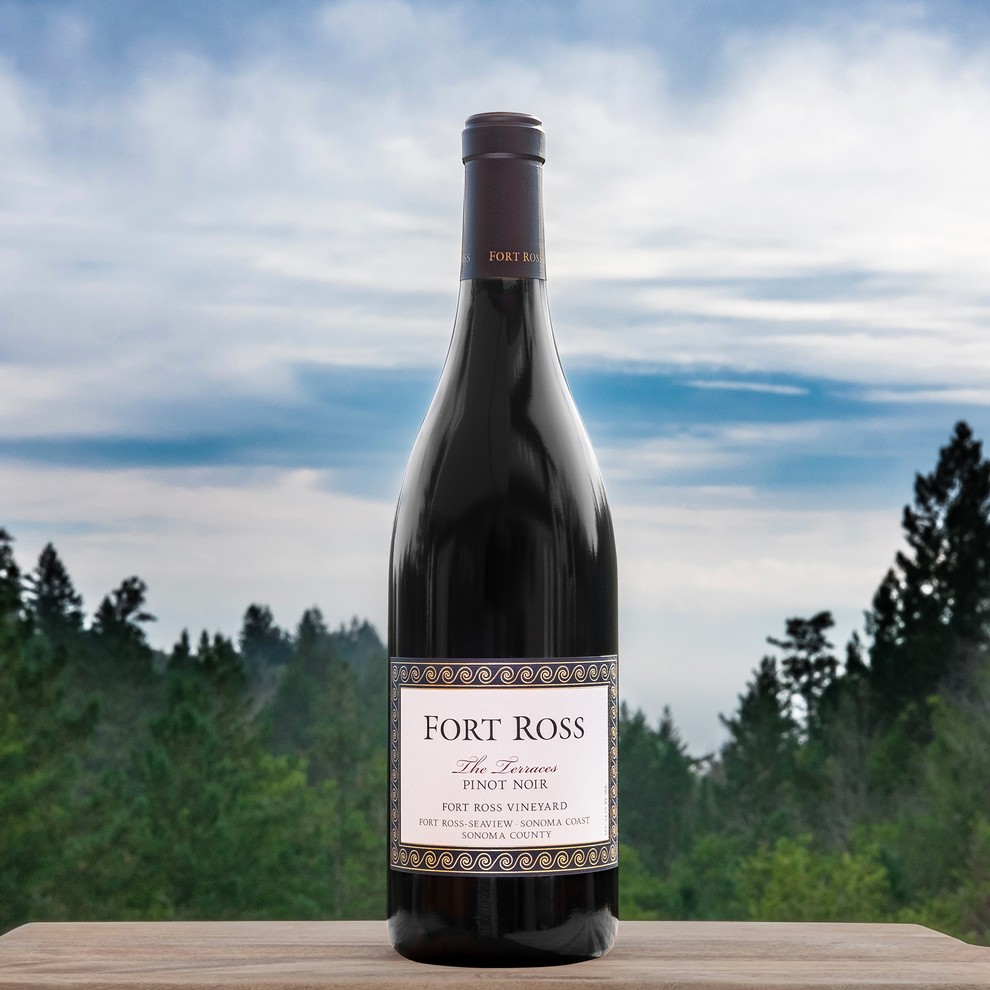 From our mountain vineyard that overlooks the Sonoma Coast in the Fort Ross-Seaview American Viticultural Area, Fort Ross Vineyard & Winery produces limited quantities of single vineyard, Estate grown, cool-climate Pinot Noir, Chardonnay, and Pinotage. With spectacular views of the Pacific Ocean less than one mile away, the vineyard is divided into 32 separate blocks, one-half to two acres in size, that range in elevation from 1700 down to 1200 feet above sea level. Owners, Lester and Linda Schwartz with their small crew began preparing the 52-acre vineyard in 1994. It took them 4 years of preparation before they could begin planting. The year 2000 marked the first vintage from the Fort Ross Vineyard.

92+ Points - Jeb Dunnuck
Bright black cherry, candied violets, Asian spice, and some cedary herb notes emerge from the 2017 Pinot Noir The Terraces, which is medium-bodied and has a fresh, focused texture, good acidity, and a great finish. It's going to benefit from a year or two of bottle age.

Wine Profile
Tasting Notes
This is a pure expression of a single clone, from our unique terraced block, captures the essence, character, and purity of the Calera Clone. Alluring aromas of black cherry, cassis and mulberry are framed by just a hint of amber. The focused palate has layers of raspberry and plums underscored by dried orange peel and savory spice notes. Supple, integrated tannins give way to the captivating velvet texture that lingers throughout the finish. This finely structured Pinot Noir is certain to evolve gracefully for years to come.
Vineyard Notes
The 2017 growing season welcomed generous rainfall for the first several months of the year. After five drought years, the soils were hydrated and our irrigation pond was brimming. Bud-break occurred in mid-March followed by a warmer than usual spring which brought an early fruit-set, fortunately, by then the rains had subsided. The summer enjoyed mild to average, 80-85° temperatures, allowing the grapes to develop ideal complexity and flavors with optimal development. During the first week of September, all of California experienced a heat spike, with this the first few blocks were harvested. Temperatures then mellowed during the remainder of harvest, allowing each variety to be picked at the ideal time. Pinot Noir was unhurriedly harvested between August 31–September 19, one of the many advantages of growing grapes overlooking the cool Pacific Ocean. Chardonnay was picked September 10–14 and finally the slower ripening Pinotage on October 3rd. Fortunately, all of our fruit was picked prior to the heartbreaking 2017 Sonoma fires. The vintage brought in lower yields, producing wines with great depth and concentration, while the hydrated soils delivered vibrant aromatics and acidity.
Winemaker Notes
The Terraces is crafted from 100% Calera clone planted on our single unique Terraced Block #11. Comprised of rocky Hugo Boomer sandy loam soils, this block was painstakingly carved out of the rugged hillside that faces the cool Pacific. With its steep South West aspect, this may be one of the most extreme plantings on the Sonoma Coast. The grapes for this Pinot Noir were handpicked during the cool hours of the night in 2-gallon trays. After hand sorting, the fruit was cold-soaked for several days. Fermentation occurred with native yeast in 5 and 10-ton stainless steel tanks. The caps were punched down 1 or 2 times per day, depending on the stage of the fermentation. The wines were then barreled in a combination of 45% new and 55% neutral French oak.