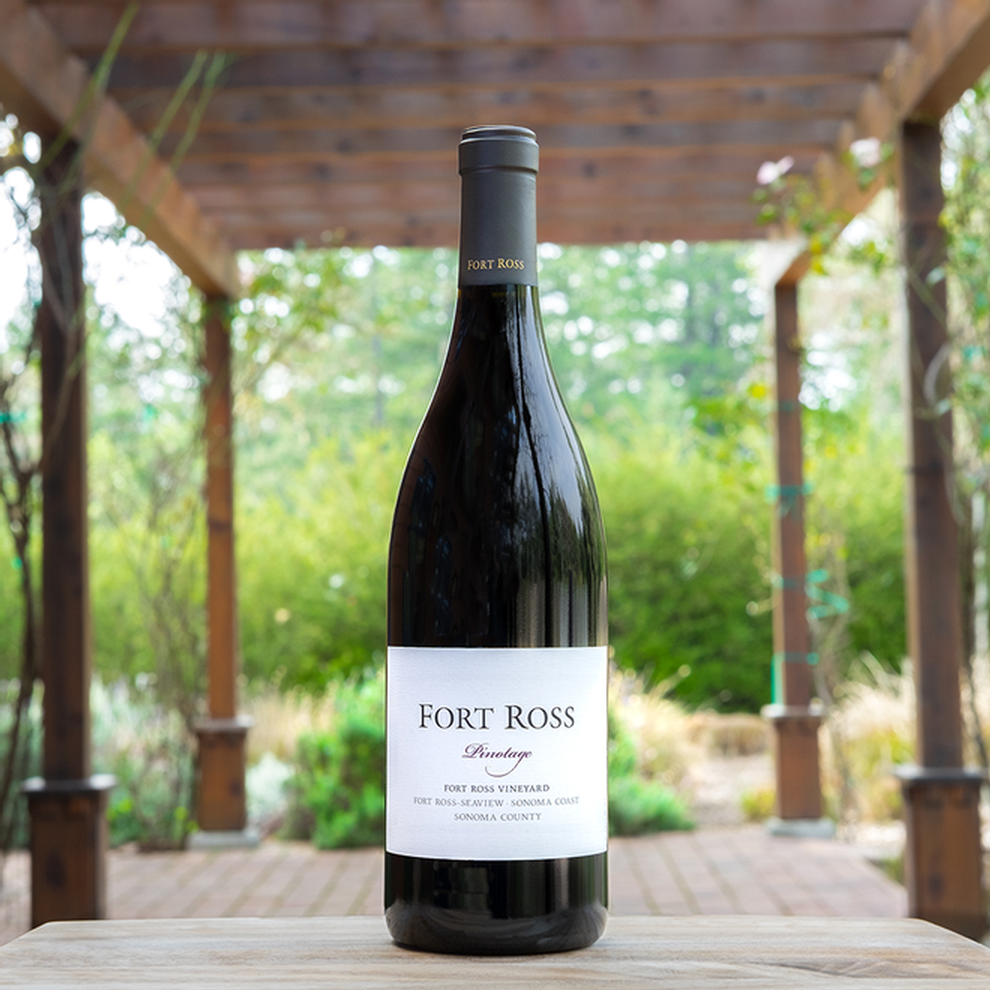 92 Points - Wine Advocate
The 2017 Pinotage Estate Fort Ross Vineyard has a medium to deep ruby color and very pretty scents of garrigue, dust, peppercorn and amaro over a core of roasted cranberries and red cherries plus notes of cola and woodsmoke. Medium to full-bodied, it packs in the spiced, earthy fruits, with a chalky frame and great freshness, finishing long. IMPRESSIVE! If you enjoy Pinot Noir or Grenache in a pleasantly rustic style, this may be for you.

Wine Profile
Tasting Notes
TASTING NOTES: While Pinotage shares many traits with Pinot Noir, there is an earthy brambleness that distinguishes it from its more famous cousin. This legendary South African varietal is a true rarity in California and our 2017 Pinotage is in itself a special wine. Displaying a deep ruby hued core, this wine has a slight haze, which speaks to its being bottled unfined and unfiltered. Slightly wound upon removing the cork, the wine slowly starts to express itself as it begins to breathe, through bold notes of plum, ripe blueberry, new leather, and cedar pencil shavings.The palate dazzles with a delicate tension of juicy black fruits with an array of spicy, savory characteristics. Firm, persistent tannin surrounds a core of baked dark berries, licorice, cocoa, and freshly ground coffee.This wine has incredible structure and a long-lasting finish that is sure to age gracefully well into the next decade.
Vineyard Notes
The 2017 growing season welcomed generous rainfall for the first several months of the year. After five drought years the soils were hydrated and our irrigation pond was brimming. Bud-break occurred in mid-March followed by a warmer than usual spring which brought an early fruit-set, fortunately, by then the rains had subsided.The summer enjoyed mild to average, 80-85° temperatures, allowing the grapes to develop ideal complexity and flavors with optimal development. During the first week of September, all of California experienced a heat spike, with this the first few blocks were harvested. Temperatures then mellowed during the remainder of harvest, allowing each variety to be picked at the ideal time. Pinot Noir was unhurriedly harvested between August 31–September 19, one of the many advantages of growing grapes overlooking the cool Pacific Ocean. Chardonnay was picked September 10–14 and finally the slower ripening Pinotage on October 3rd. Fortunately, all of our fruit was picked prior to the heartbreaking 2017 Sonoma fires. The vintage brought in lower yields, producing wines with great depth and concentration, while the hydrated soils delivered vibrant aromatics and acidity.
Production Notes
Pinotage was first developed in South Africa in 1925 by crossing the two vinifera varieties, Pinot Noir and Cinsault which was called Hermitage at the time. Our Pinotage consists of two Fort Ross proprietary clones, MM1 and MM3, developed at UC Davis from budwood personally imported by Fort Ross from one of the most select Pinotage vineyards in South Africa.The grapes for this Pinotage were handpicked during the cool hours of the night in small two-gallon picking trays. After hand sorting, the fruit was cold soaked for several days and fermented in a single 5 ton tank. During fermentation, the wine was pumped over and sparingly punched down, to carefully control the amount of extraction from the thicker skins in order to produce a well-balanced, age-worthy Pinotage. Shortly after pressing, the wine was barreled in a combination of 15% new and 85% neutral French oak for 14 months.
Winemaker Notes
Proprietary Clones MM1 and MM3, bottled Unfined & Unfiltered
Food Pairing Notes
Our Pinotage pairs beautifully with exotic spices, rich Italian food, smoked and grilled meats, anything from a wood fired oven and for the adventurous - sweet berry desserts.
Other Notes
195 cases produced