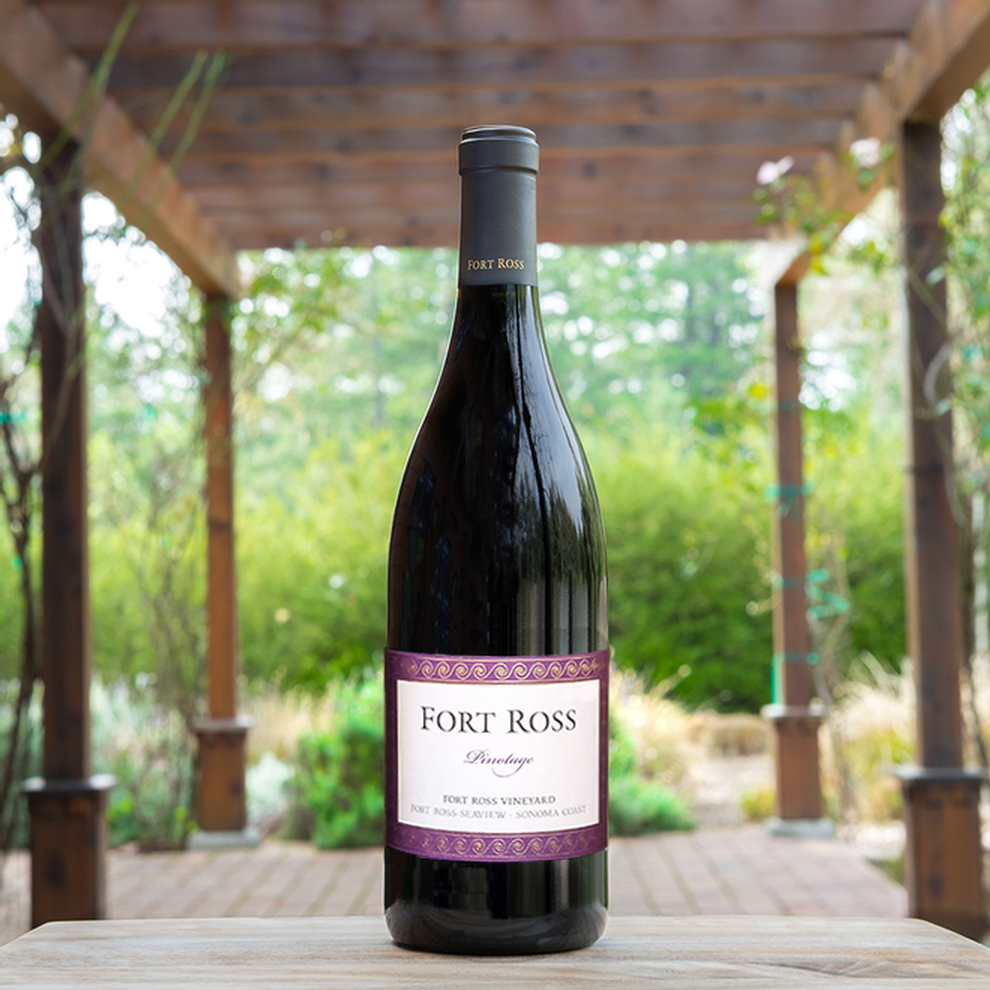 90 Points - Wine Advocate
The 2016 Pinotage Fort Ross Vineyard is medium ruby-purple in color with a broody nose of tar, earth and bay leaves with baked black berries and cherries and meaty hints. Medium to full-bodied, it's dark-fruited in the mouth with savory and earthy accents, framed by firm, chewy tannins and lifted by good freshness, finishing long and earthy.

17 Off-The-Beaten-Path California Reds - Food & Wine Magazine
Lester and Linda Schwartz planted a vineyard in the early 1990s on a ridge about a mile from the ocean in Fort Ross, north of Jenner, California—the extreme Sonoma Coast. Eventually, they helped define and create the Fort Ross-Seaview AVA. Known for their vivid, electric, ocean-spray-kissed Pinot Noirs and Chardonnays, they also planted some Pinotage—a grape typical to South Africa—as an homage to their days at the University of Cape Town. There are just over 50 acres of Pinotage planted in the entire state, and this particular one is made in minuscule quantities…less than 10 barrels. It's sumptuously earthy, boasting silky dark cherries, blackberries, and firm, grippy tannins, with lavish baking spices rounding it all out.

Wine Profile
Tasting Notes
While Pinotage shares many traits with Pinot Noir, there is an earthy brambleness that distinguishes it from its more famous cousin. Magnetic aromas of dark berries and lychee fruit are supported by hints of gardenia and white pepper notes. This deep purple Pinotage has a concentrated depth of bold flavors that envelop the palate with tiers of blackberry, loganberry and black plum framed by sassafras and ginger. Prominent dark berry fruit is in complete harmony with the ripe tannins, balanced acidity and long, persistent finish. The layered textural complexities and robust flavors pair beautifully with exotic spices, rich Italian food, smoked and grilled meats, anything from a wood fired oven and for the adventurous - sweet berry desserts. Prior to release, this wine was patiently cellared until optimal, but it will certainly age gracefully for years to come.
Vineyard Notes
2016 was another year of drought throughout California. Fortunately, Fort Ross Vineyard was not affected as the early December rainfall was sufficient to fill our irrigation ponds to capacity and even allowed us to have water at the end harvest. The ideal moderate weather on the coast leading up to harvest was free of heatwaves and rain, allowing the grapes to mature slowly and evenly to reach their optimal development. The Pinot Noir was unhurriedly harvested between September 3 — 20, one of the many advantages of growing grapes overlooking the cool Pacific Ocean. Chardonnay was picked September 17 — 26 and finally the slower ripening Pinotage on September 23 — 28. Our new block of Chardonnay, just off Meyers Grade Road had its first harvest in 2016 and the fruit is showing great promise. The lasting memory of the harvest is a vision of perfect bunches of grapes, with no side wings to delay the ripening, even berry size and a balanced crop hanging on the vines. These wines are vibrant and aromatic with excellent acidity
Production Notes
Bottled Unfined & Unfiltered, Proprietary Clones: MM1 & MM3
Winemaker Notes
Pinotage was first developed in South Africa in 1925 by crossing the two vinifera varieties, Pinot Noir and Cinsault which was called Hermitage at the time. Our Pinotage consists of two Fort Ross proprietary clones, MM1 and MM3, developed at UC Davis from budwood personally imported by Fort Ross from one of the most select Pinotage vineyards in South Africa. The grapes for this Pinotage were handpicked during the cool hours of the night in small two-gallon picking trays. After hand sorting, the fruit was cold soaked for several days and fermented in a single 5 ton tank. During fermentation, the wine was pumped over and sparingly punched down, to carefully control the amount of extraction from the thicker skins in order to produce a well-balanced, age-worthy Pinotage. Shortly after pressing, the wine was barreled in a combination of 20% new and 80% neutral French oak for 10 months.
Production
240 cases produced, Winemaker: Jeff Pisoni